It was upon receipt of an email from British Airways that I began to understand how large an impact I was making on the environment. I left my corporate job in 2004 and had done some further travelling between then and now, but the email I received in around 2015 shocked me. 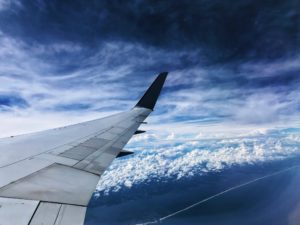 To set the scene a little better, I was in export sales, and my territory covered Scandinavia, Europe across to Russia, and North Africa. I travelled frequently in the 17 years I was with the company, although much more so in the last 10 years of being there. The top 3 airlines I used were Scandinavian, KLM, and Air France. I also travelled in my own time, often to go to the jungle, glaciers, or to see wildlife where it lives, so I was really shocked to see the metric in the image below:

Basically during that time I flew the equivalent of pole to pole 4.6 times with British Airways. 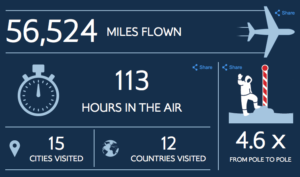 Knowing that I have travelled a lot further than most, and less far than some, I started to consider what would happen if I totalled all my flights that spanned 40 + years. I have visited 69 countries, many several times and even flew London to Edinburgh, and Teesside on occasion.

On average, a plane produces a little over 53 pounds of carbon dioxide (CO2) per mile- according to google. So in that case, I produced 2,995,772 pounds of CO2 from this company in the time I used it. Again, this was not a company I used very often.

“For a New York to Berlin flight, you would need to plant 11, 21 or 213 trees, depending on how you choose to consider the sequestration capacity of planted trees.

You can do the maths, I am going to start planting trees.

As I became more conscious of my footprint, and what that implied, I was very grateful for this wake up call I had received. It set me on the path that would lead to Wild Nettle Gardens.

I had always considered myself fairly environmentally aware- apart from the plane journeys, car driving and meat eating, I thought I was living a relatively clean life. Turns out I was not only wrong about that, but learning how to live ethically was not an easy ride for me.

So many of the things that we think we absolutely need are in fact just the end result of excellent advertising. Granted some of them bring comfort to our lives, but many of the clothes we buy that we never wear, or the nic nacks that gather dust, or the gadgets that we think we need, only to find they are in the bag for the charity shop at some later date, are in fact unnecessary? 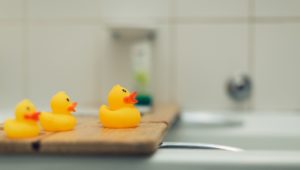 Downsizing has really taught me a lot about what I need. Decluttering was done for me last year with the fire, and although very difficult, it has allowed me to only replace everything with things I love or what I need.

I intend to have an area to sell pre loved clothes, toys and books in the shop as I feel that this is an important part of reuse, recycle and repurpose which is one of the tenets of our organisation.

The reasons I am setting up Wild Nettle gardens are many and varied- grow amazing food and produce, including medicinals, grow flowers for beauty and colour, grow plants to sell to help other gardens become beautiful, sequester carbon, help people with stress, and PTSD, and encourage others to enjoy the outdoors.

I hope that by doing this I can mitigate some of the carbon damage that was done before I became conscious. I am also hoping to help others do the same.

This site uses Akismet to reduce spam. Learn how your comment data is processed.